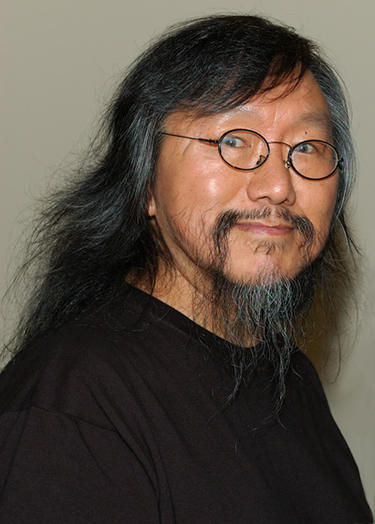 Alootook Ipellie was an Inuit translator, illustrator, reporter and writer. Primarily known for his poems, short stories and many illustrations—which vary from political cartoons and comic strips to portraits and larger drawings—Ipellie has been featured in several magazines, journals and anthologies. Though much of his work is still hidden away in private collections and books, he has an important place in Inuit and Canadian literary traditions. Described as a prodigious artist and a man of few words who spoke volumes through his essays, stories and poetry (Amagoalik 42), Ipellie explored and gave voice to many of the cultural, social, political and economic issues affecting Indigenous communities in Northern Canada.

Ipellie was born in 1951 in Nuvuqquq, in the Qikiqtaaluk region on Baffin Island in what is now Nunavut. His father died shortly after his birth; as result, his family experienced considerable hardship when he was young. When Ipellie was four, his mother and stepfather moved the family to Iqaluit (formerly Frobisher Bay), to live in a township the federal government had set up in order to create permanent Inuit settlements in the North and help contain introduced diseases.[1] At age five, however, Ipellie was diagnosed with tuberculosis, separated from his family and sent to Mountain Sanatorium in Hamilton, where he had to learn English in order to communicate. So began a pattern of moves between the North and South that, as one scholar has pointed out, in many ways characterized the rest of Ipellie’s life.[2]

Ipellie continued to live with his mother and stepfather in Iqaluit until he was ten. Due to his stepfather’s struggles with alcoholism—a problem that has historically plagued the Arctic to a much greater degree than other regions in Canada—Ipellie decided to leave home and live with his uncle.[3] He later moved in with his grandparents, who regularly took in and adopted other children from the community who weren’t receiving the care they needed at home.[4] During this time, Ipellie grew close to his uncle, who maintained a more traditional Inuit lifestyle and who, according to Ipellie, was responsible for teaching him about his people’s connection to the land. He was also greatly influenced by his grandfather, Inutsiaq,[5] a well-known carver, who instilled in him a fascination with storytelling.[6]

Thanks to the lack of a secondary schooling system in the North, however, Ipellie was forced to leave home and enroll in a school in Ottawa in 1967, where he was billeted with an English-speaking Canadian household. He struggled greatly with the educational format, the distance from his family, and an overwhelming sense of culture shock—one that caused him to question whether he were still “an Innumarik, a real Inuk” (Ipellie, “Introduction” vii).[7] In the years that followed, Ipellie was torn between attempting to pursue his interest in art, find a reliable means of employment and return home to Iqaluit, while also grappling with his school counselor’s firm opposition to his dream of going to art school and his repeated relocation to different cities, often against his will.

Ipellie eventually made his way home but, shortly after his return, found himself unemployed and battling depression. After a three-month stint working for CBC Radio as an announcer and producer, Ipellie became involved with the Inuit Tapirisat (now Inuit Tapiriit Kanatami, or ITK), an organization whose aims were to draw attention to Inuit community issues and to preserve and promote Inuit culture. He moved to Ottawa in 1972, and during the early 1970s, sold his first pen-and-ink drawings and published some of his early poems and stories in North/Nord and Inuktitut. In 1973, he started work as a translator for the magazine, Inuit Monthly (now renamed Inuit Today). At first he produced the occasional drawing on commission, but by 1974, in order to fill empty space in the magazine, he had begun a regular cartoon strip, dubbed “Ice Box,” which examined, with humour, irony, patience and wit, the ways in which southern Canadian culture had influenced and changed Indigenous communities in the North.[8]

Throughout the remaining 1970s, Ipellie’s roles and responsibilities with Inuit Monthly expanded: he began to contribute poems and photographs; managed the magazine’s design; wrote a regular column, “Those Were the Days”; and was the magazine’s primary editor from 1979 to 1983. During this period, he also found time to collaborate with Robin Gedalof (later Robin McGrath) on an anthology of Inuit writing, Paper Stays Put (1980), where several of his stories, poems, and images were featured. In the 1980s and early 1990s, he contributed to and worked as an editor for many different magazines and journals, including Inuit (1984-1986), a magazine published by the Inuit Circumpolar Conference; Nunavut Newsletter (1991-1993), which was published by the Tugavik Federation of Nunavut, the organization responsible for the creation of the Nunavut territory; and Nunatsiaq News, a weekly newspaper distributed in Nunavut.

Ipellie published his first collection of short stories and drawings in Arctic Dreams and Nightmares in 1993. According to some scholars, Arctic Dreams marks a turning point in Ipellie’s work and reputation as an artist; his stories, poems, and drawings, which had previously been created for a largely Inuit audience, now captured the attention of Southern critics and garnered him well-deserved, if somewhat belated, recognition in academic and critical spheres across the rest of Canada (Kennedy, “Southern Exposure” 356-358). As one of the first single-authored short story collections by an Inuit artist, Arctic Dreams became popular in undergraduate Indigenous literature courses in Canada, and remained in print until 2006.[9]

Ipellie’s work has since been featured in numerous magazines and journals as well as anthologies including Penny Petrone’s Northern Voices: Inuit Writing in English  (1988); various editions of Moses and Goldie’s Anthology of Canadian Native Literature in English (1992, 1998, 2005); The Exile Book of Native Canadian Fiction and Drama (2010); Gillian Robinson’s The Journals of Knud Rasmussen: A Sense of Memory and High-Definition Inuit Storytelling (2008); and Sophie McCall et al.’s Read, Listen, Tell (2017). He worked with Gedalof on what was intended to be an Inuktitut language textbook for use in Northern Schools, which was never published/completed; with Hartmut Lutz on The Diary of Abraham Ulrikab (2005); with David MacDonald on a non-fiction children’s book, The Inuit Thought Of It: Amazing Arctic Innovations (2007); and with Anne-Marie Bourgeois on I Shall Wait and Wait (2009). He also wrote a novel, titled Akavik, The Manchurian David Bowie, which has yet to be published.

Despite his profound ability to capture the complexity of what it means to be Inuit today, much of Ipellie’s work still has not received the attention it merits, likely because it does not conform to contemporary expectations of what Inuit art should look like.[10] Recent exhibitions, such as the internationally touring retrospective, “Walking Both Sides of an Invisible Border” (2018), which showcased over 100 pieces of his work from the 1970s until his death in 2007, are seeking to revise his reputation as an Inuit artist and draw attention to his lasting voice and vision.

———. The Inuit Thought of It: Amazing Arctic Innovations. With David MacDonald. Annick Press, 2007.

———. Indigenous Diasporic Literature: Representations of the Shaman in the works of Sam Watson and Alootook Ipellie. U of Wollongong, PhD dissertation, 2009.

Alootook Ipellie entry by Lara Estlin. July 2019. Lara is a former SFU student who completed her English Honours project on Indigenous authors William Apess (Pequot) and George Copway (Anishinaabe). She works as a research assistant for the Department of Indigenous Studies at SFU.


Please contact The People and the Text at people_text@sfu.ca with any comments or corrections.

[1] For more on the history of Canada’s settlement initiatives in the North and how they impacted the lives of Ipellie and his family, see McMahon-Coleman, Indigenous Diasporic Literature: Representations of the Shaman in the Works of Sam Watson and Alootook Ipellie, PhD dissertation, University of Wollongong, 2009, pp. 98-100.

[2] For more on how the Canadian government’s health and relocation policies affected Ipellie’s generation and created an Inuit diaspora, see chapter one of McMahon’s dissertation, “A Place of Terror and Limitless Possibilities: Arctic ‘Exploration’ and Inuit History,” (71-97) and chapter two, “Arctic Dreams and Urban Reality: The Personal History and Influences of Alootook Ipellie (98-110, 116).

[4] Taking in and adopting children from the community as one’s own, if their immediate family or caregivers died or if they weren’t receiving proper care, was a common practice in Inuit culture that Ipellie’s grandparents continued (McMahon Indigenous Diasporic Literature 104; Bennett and Susan Rowley 40-42).

[5] Ipellie’s grandfather’s name has been anglicized in some records as Eenutsia and in others as Ennutsiak.

[6] For more on Ipellie’s childhood, his relationship to his mother, and the ways in which his uncle and grandparents influenced his early life and instilled a sense of Inuit values and cultural identity in him, see Ipellie’s reflection on the matter in “Those Were the Days VII,” pp. 82-84. See also Kennedy’s interview with Ipellie in “Alootook Ipellie: The Voice of an Inuk Artist,” pp. 157-159.

[7] Education is a theme Ipellie continually returns to throughout many of his publications. For a reflection on the schooling he received, see his introduction to Arctic Dreams, pp. vi-vii. For more on his views regarding Canada’s education system and its impact on Inuit youth, see “Those Were the Days IX,” Inuit Today, vol. 4, no. 3, pp. 70-73 and “Those Were the Days XIV,” Inuit Today, vol. 4, no. 10, 1975, pp. 46-49.

[8] For a more in-depth reflection on the ideas and issues expressed in Ipellie’s political cartoons, as well as how he balanced serious subjects with humour and wit, see Kennedy’s interview, “Alootook Ipellie,” pp. 160-161.

[9] For a critical analysis of the stories in Arctic Dreams, see McMahon-Coleman “Dreaming an Identity Between Two Cultures: The Works of Alootook Ipellie,” pp. 108-125. For an analysis of Arctic Dreams in conversation with other texts produced by Ipellie, see Kennedy’s “Southern Exposure: Belated Recognition of a Significant Inuk Writer-Artist” (1995) and “Border under Siege: An Author’s Attempt to Reconcile two Cultures” (2002).

[10] In fact, the supposedly “clashing” components of Ipellie’s artwork were, one scholar presumes, likely the reason behind Theytus Books’ initial rejection of Ipellie’s Arctic Dreams and Nightmares in 1990 (McMahon-Coleman Indigenous Diasporic Literature 95).  For more on how Ipellie’s work does or does not fit within traditional genres and styles of Inuit art, see McMahon-Coleman, Indigenous Diasporic Literature, pp. 13, 110-111, 117. See also Ipellie’s reflection on art critics’ inability to categorize his work in his introduction to Arctic Dreams, especially pp. xvi-xvii.