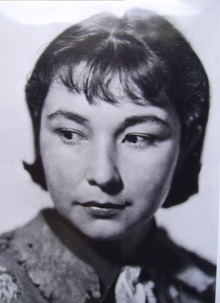 Anahareo, born Gertrude Bernard, was an Algonquin and Mohawk writer and conservationist was born in Mattawa, Ontario. Anahareo is largely known as the wife of Grey Owl (Archibald Belaney), the trapper, writer and famed conservationist who claimed to be part Scots and part Apache, but was revealed to be an Englishman after his death in 1938. Anahareo and Grey Owl had one daughter, Shirley Dawn (b. 1932). Anahareo was born to parents Mary Nash Ockiping (Algonquin) and Matthew Bernard (Algonquin and Mohawk). Mary came from Pikwàkagàn First Nation on Golden Lake in Ontario (Gleeson 5).

After her mother died in 1911 when she was four years old, she was raised by her paternal grandmother, Marie Catherine Papineau Bernard (Algonquin, b. Oka 1833). Catherine, also known as Big Grandma, spoke to Anahareo in the Mohawk language (Kanien'keha) taught her skills and crafts, instilling in Anahareo the value of and pride in her heritage. As a child, Big Grandma was taken from her family and sent to a convent where she to learn French and Catholicism, from which she later escaped as a teenager and returned to find family in Oka. She married John Bernard Nelson, a Mohawk man; his parents disapproved and they moved from Oka to Belleville and then Mattawa.  Although she was not raised on her ancestral territories she raised her descendants with the teachings she learned from her grandmother - a testament to her strength and resiliency.

Unable to sit still, Anahareo would often cut class to explore the woods and wilderness - even paying friends to complete and hand in assignments for her. At 11 she proved to be too much for her beloved grandmother. Her father arranged that she would live with her aunt who was invested in upholding the values and social conventions of the Catholic Church and mainstream society. Anahareo's unrestrained passion for life and adventure continued to clash with these ideals. In her mid to late teens, she moved back in with her father who worked away from the home most of the time, giving her more freedom than her previous guardians.

She met Grey Owl in 1925 at age 19 while working as a waitress at a resort on Lake Wabikon in Temagami, northern Ontario. They had an instant connection and shortly after they met Anahareo went to live with Grey Owl in his trapping cabin. Although her family did not approve, this decision and relationship shaped the rest of her life and career. Grey Owl taught her about trapping and much of what she came to know about life and survival in the bush. He also gave her an Indigenous name, based on her memories of her Mohawk great grandfather Jean Baptiste Anenharison, a chief who died in 1856 (the name was spelled in various ways, including Narisson).

Trapping had pushed the beavers nearly to extinction. Grey Owl trapped a mother beaver out of season, and Anahareo insisted that he rescue the kits. They decided to work in beaver conservation. Anahareo encouraged Grey Owl to write and to give public talks about conservation. Ironically, it was Grey Owl’s writing that drove the biggest wedge between the two as Anahareo did not find the same companionship in the solitary writer as she had in the trapper and hunter. In 1936 she left him and the cabin for the last time; however, they parted on good terms as their relationship and everything she gained from it pushed her to write two memoirs in defence of him and his legacy.

Two years after their separation, Grey Owl died and his true heritage as an Englishman was discovered. The fame that his best-selling books and speaking tours in Britain, the US and Canada had brought him meant that the scandal was widely reported in the English-speaking press. Although Anahareo was also shocked, she was encouraged by his publisher, Lovat Dickson, to write My Life with Grey Owl (1940). Dickson, interested in preserving Grey Owl’s book sales, controlled the way their story was told. Her dissatisfaction would later lead her to rewrite and republish the book.

In addition to a remarkable career in conservation activism and in animal rights, she was herself a remarkable Indigenous woman who fought against many levels of injustice, racism, and sexism as a young single native mother and as a gold prospector venturing out on her own. She had a second daughter (Anne. b. 1937) whom she put up for adoption. While she continued to struggle to find work to support herself and her first child, she began writing her first book and married (1939) Count Eric Moltke, a Swedish man with whom she had her third child (Katherine b. 1942).

After an intense 20 year marriage, the two separated and Anahareo became involved in the activism of the 1960s. There was renewed interest in Grey Owl’s writings and Anahareo seized this opportunity to rewrite her first book on Grey Owl in order to produce a more accurate version. Published in 1972 with the help of her daughter the second book, Devil in Deerskins, quickly became a best-seller and launched her into celebrity status as a knowledgeable and important voice not only on Grey Owl and his work, but also on conservation and animal rights issues. She received multiple awards in her career including the Order of Canada in 1983. She died in Kamloops just three years later and rests with Grey Owl and their daughter in Prince Albert National Park.


Anahareo entry by Alison Wick, April 2018. Alison is a fourth-year settler student in the departments of Indigenous Studies and Publishing at Simon Fraser University. She has researched featured authors and written biographies for The People and the Text website.

Smith, Donald B. From the Land of Shadows: The Making of Grey Owl. Vancouver:  Douglas & McIntyre, 1991.

Anahareo. Devil in Deerskins: My Life with Grey Owl. 1972.


Please contact The People and the Text at people_text@sfu.ca with any comments or corrections.