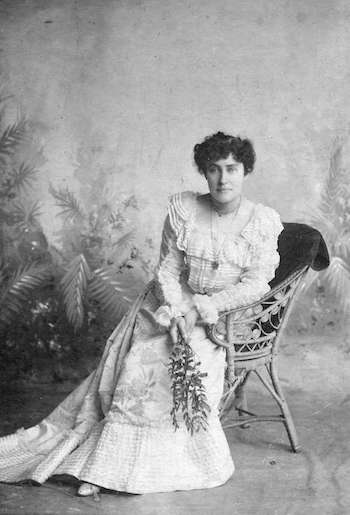 As an Indigenous woman publishing at the turn of the nineteenth century in Canada, Emily Pauline Johnson (Tekahionwake) stood at the intersection of issues of race, gender, and colonialism – an historical moment evidenced by the notable absence of Indigenous representation or female voice in the literary canon. Though most often cited for her poem, “The Song My Paddle Sings” (1892), Johnson published a wide selection of poetry and prose throughout her career as a Mohawk performer/writer.

Johnson was born 10 March, 1861 on Six Nations of the Grand River territory (near Brantford, ON). Her father, Mohawk Chief George Henry Martin Johnson (Onwanonsyshon), built the impressive family home known as “Chiefswood” for his English bride, Emily Susanna Howells – a relative of American writer William Dean Howells (Strong-Boag & Gerson 49). The house boasted a unique dual-entrance design, with one door facing the road, and the other facing the Grand River – for access by canoe (Gray 44).

As the youngest of four children, Johnson enjoyed a middle-class upbringing and was educated mostly from home; she attended the reserve school for two years, and then Brantford Collegiate Institute from the ages of 14 to 16 (Gray 70). In 1877, Johnson returned to the family home and spent her time reading, writing, visiting with friends and canoeing on the Grand River. When her father died in 1884, the family could no longer afford to live at Chiefswood, and thus relocated to a smaller home in Brantford. Johnson, now 23 years old and unmarried, began publishing her poetry in periodicals including Gems of Poetry (New York) and The Week (Toronto). By 1886 her reputation was growing, and she began signing her work with both her English name and adopted Mohawk name, Tekahionwake – a name that belonged first to her great-grandfather, Jacob Johnson (Keller 47).

With the 1892 publication of Johnson’s “A Strong Race Opinion: On the Indian Girl in Modern Fiction”, a critical interjection was made into the field of Canadian literature through her criticism of the literary representations of Indigenous women. That same year, Johnson delivered a captivating recitation of the politically-charged “A Cry from an Indian Wife” to a crowd of Toronto’s literary select (Strong-Boag & Gerson 102); this began her career as a performer for the next 17 years, where she toured throughout Canada, the United States, and England. Often, during these performances, Johnson would appear onstage wearing a “Native” buckskin costume for the first half of the program, and would then change into an elegant gown for the second half (Foster 42; Gerson & Strong-Boag xvii).

In 1895, Johnson published her first book of poetry, titled The White Wampum (London: John Lane), which met with great success. Johnson moved to Winnipeg after the death of her mother (1898), and was briefly engaged to Charles Robert Lumley Drayton that same year (Strong-Boag & Gerson 140). Her second poetry collection, Canadian Born (Toronto: Morang), was published in 1903.

After retiring from the stage in 1909 due to declining health, Johnson moved to Vancouver, BC, where she began writing short articles for periodicals including The Mother’s Magazine, The Boys’ World, and The Vancouver Daily Province newspaper. Many of the stories published in these periodicals were based on her friendship with Squamish Chief Joe Capilano (Sahp-luk), whom she had met while touring in London in 1906. When she became ill with breast cancer, friends and supporters endeavored to publish a collection of Johnson’s prose stories to raise funds for her medical treatment (Strong-Boag & Gerson 66; Keller 256-7) . This collection was titled Legends of Vancouver, and was first published privately in 1911. A collection of her poetry, titled Flint and Feather (Toronto: Musson), was published in 1912 under similar circumstances – and both collections remain in print today.

Johnson eventually succumbed to her illness, and passed away on 7 March, 1913. The city of Vancouver held a funeral several days later, with the grand procession taking place between the Bute Street hospital and Christ Church Cathedral (Keller 269-70). Johnson’s ashes were interred near Ferguson Point in Stanley Park, within view of her beloved Siwash Rock. A memorial service was also held for Pauline at the Mohawk Church on the Six Nations Reserve (Foster 152). There were two posthumous prose collections published following her death: The Moccasin Maker (Toronto: Briggs), which includes many stories from The Mother’s Magazine, and The Shagganappi (Toronto: Briggs), a collection of stories from the The Boys’ World periodical. A monument was raised at her gravesite in Stanley Park in 1922 by the Women’s Canadian Club (Keller 277; Foster 153).

---. Legends of Vancouver. Vancouver, BC: privately printed, 1911. [many subsequent editions]

Strong-Boag, Veronica, and Carole Gerson. Paddling Her Own Canoe: The Times and Texts of E. Pauline Johnson (Tekahionwake). University of Toronto Press, 2000.

McRaye, Walter. Pauline Johnson and Her Friends. The Ryerson Press, 1947.

E. Pauline Johnson entry by Alix Shield, December 2017.  Alix Shield is a settler scholar and PhD candidate in the Department of English at Simon Fraser University. Her research uses contemporary digital humanities methods to analyze collaboratively-authored twentieth- and twenty-first-century Indigenous literatures in Canada. Alix has digitized many of the E. Pauline Johnson archival documents in our collection, and is also responsible for the development and maintenance of our project's Drupal multisite.