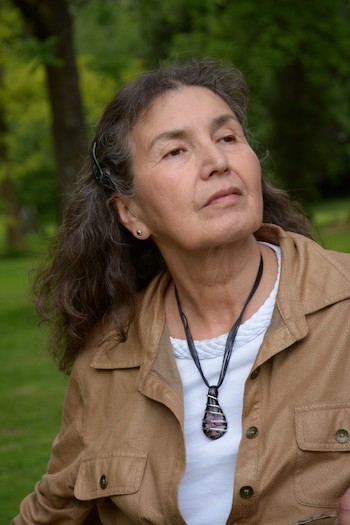 Jeannette Armstrong was born and raised on the Penticton Indian Reserve, one of eight Syilx (Okanagan) reserves located in both Canada and the United States. She is a fluent speaker of the Syilx language, Nsyilxcn, and is a knowledge keeper of plant medicines, Syilx traditions, and cultural protocols. She is a writer, poet, teacher, and artist, and is a strong voice in Indigenous environmental ethics.

In 1986, Armstrong became the executive director of the En’owkin Centre, a title she still holds, and in 1989 she helped found the En’owkin School of International Writing, the first credit-giving creative writing program in Canada managed solely by and for Indigenous people, where she also works as director and instructor. The En’owkin Centre is a post-secondary institution which focuses on cultural, educational, and ecological arts and creative arts, and is operated solely by the six Syilx Canadian bands in partnership with the University of Victoria, the University of British Columbia Okanagan, and the Nicola Valley Institute of Technology.

Armstrong has been writing since she was fifteen years old and has had many of her short stories and poems published in journals and anthologies. In 1986, Armstrong published her first novel, Slash – a story about a young Okanagan man finding his culture after a life of racism and violence. In 1991, Armstrong published a book of poetry titled Breath Tracks. She published her second novel, Whispering in Shadows, in 2000 – a story about an Okanagan woman navigating her cultural knowledges through colonial surroundings while also engaging in environmental activism across the continent.

Armstrong holds a Bachelor of Fine Arts from the University of Victoria and a PhD from the University of Greifswald, Germany. She also has been granted honorary doctorates from St. Thomas University in New Brunswick, and the University of British Columbia Okanagan. Currently, she is working as an Assistant Professor of Indigenous Studies with the Irving K. Barber School of Arts and Sciences at UBC Okanagan. In 2013 she was appointed a Canada Research Chair in Okanagan Indigenous Philosophy to research, document, categorize and analyze Okanagan Syilx oral literature in Nsyilxcn.

Jeannette Armstrong entry by Alexa Manuel, September 2018.  Alexa Manuel (Silyx) is a PhD student at the University of British Columbia. She works as a research assistant for The People and the Text, located in the Department of First Nations Studies at SFU.