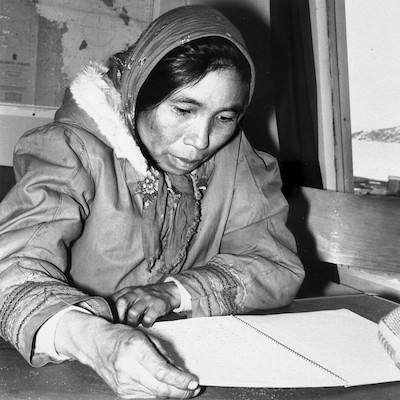 Mitiarjuk Attasie Nappaaluk (also known as Salome Mitiarjuk Nappaaluk) (Martin) was born in 1931 near Kangiqsujuaq, in Nunavik, northern Quebec. She was the eldest child. She had no formal schooling, but was educated by her mother and elder female relatives in traditional female occupations and, unusually, by her father as well. Having no sons, her father instructed her in the secrets of hunting and other typically male tasks and she often hunted on her own. In the Inuit culture, she belonged to a “third sex” or gender, neither male or female. This qualified Mitiarjuk as a mediator between sexes and different generations (d’Anglure vii).

At the age of 16, Nappaaluk, known to be very skillful, was courted by many young men. She chose the youngest suitor who agreed to move in with her family and take her place as primary provider. This was unusual, as most Inuit women went to live with their husbands’ families after marriage. She devoted several years to having children and caring for her family.

In her early twenties, renowned for her creativity, she was asked to assist some Catholic missionaries who were interested in studying the Inuit language. Mitiarjuk was an invaluable assistant, initially helping Father Lucien Schneider produce an Inuit - French dictionary. In return, she learned to write in syllabics, a writing system created by the Wesleyan missionaries to advance the conversion of Indigenous people and adopted by other missionaries because it was easy to learn (d’Anglure vii). Later on, Father Robert Lechat, wishing to improve his language skills, asked her to write down as many words and phrases she could think of. Nappaaluk recorded all the normal daily phrases she could think of but soon became bored. Using syllabics, creating her own symbols, and demonstrating the narrative style of her own people, she began to write the story of a female protagonist, Sanaaq, and a small group of Inuit families, describing events that occurred in the 1920s (Martin). She wrote the first part of this novel in the early 1950s, then stopped writing for several years due to an extended stay in the hospital and the transfer of Father Lechat to a new area.

She met Bernard Saladin d’Anglure, a French anthropologist in 1961; he convinced her to begin working on the book again. This book became the focus of Saladin d’Anglure’s scholarly work.  He returned to Kangiqsujuaq in 1965 in order to translate the book from Inuktituut into French.  Mitiarjuk helped him add punctuation, explained difficult passages, and identified plants and animals. During this six-year period she completed this work and wrote a sequel, which is in the process of being translated now (d’Anglure x). In 1977 she was featured in the television series Femmes d’aujourd’hui as a writer and an informant on Inuit culture and language.

Her novel Sanaaq was published in 1984 in standard syllabics, fully illustrated, with funding from Ministère des affaires culturelles of Quebec. This version was distributed to all the Inuit schools in Northern Canada and is now out of print. Mitiarjuk kept 50 copies of this version to present to her many descendants. In 2002 a French translation of Sanaaq was published followed by an English version in 2014, bringing Mitiarjuk’s work to a much wider audience. She was a member of the Inuttitut Language Commission of Nunavik and authored 22 books to be used for teaching and helped to develop a curriculum for the Kativik School Board (The Office of the Secretary to the Governor General 2012). Nappaaluk also created an Inuttitut encyclopedia of Inuit traditional knowledge and translated Catholic prayer books into Inuttitut.

Mitiarjuk has earned a great deal of recognition as a writer and a scholar. In 1999 the National Aboriginal Achievement Foundation presented her with the National Award for Excellence. She earned a PhD from McGill University for her work in advancing the teaching of Nunavik’s language and culture (d’Anglure vii). In 2001 UNESCO honoured her literary works at an international conference of Indigenous writers in Paris. On May 14, 2004 Mitiarjuk was named to the Order of Canada.

Mitiarjuk was a well known and respected elder and her works were celebrated in her community; as well as her writing giving a precise and detailed account of Inuit life she also provided an insider female point of view, something that was previously nonexistent in literature by or about the Inuit people.

Mitiarjuk Nappaaluk passed away at her home in Kangirsujuaq on April 30, 2007 after a long illness. She was 78.

---. Sanaaq: An Inuit Novel. Transliterated and translated from Inuktitut to French by Bernard Saladin D'Anglure, Translated from French into English by Peter Frost. University of Manitoba Press. 2014.

Mitiarjuk Nappaaluk entry by Kimberley John, September 2018. Updated April 2019. Kimberley John (Coast Salish) is an undergraduate student at SFU, where she is studying Health Sciences and First Nations Studies. Kimberley has worked on compiling information for the biographies of featured authors on The People and the Text website.