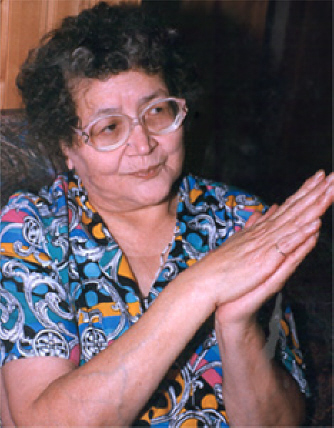 Rita Joe (born Rita Bernard) was a well-known Mi’kmaw[1] poet and songwriter who published a number of poems, songs, and an autobiography. She received numerous awards, was an important elder in her community, and has had her work featured in several anthologies.

Rita Joe was born on March 15, 1932 on a We’koqma’q[2] First Nation reserve on Cape Breton Island in Nova Scotia. She spent her early childhood with her parents and her older brother, Soln, in an environment she described as loving, gentle, and positive, yet very poor (Song of Rita Joe 17). At age five, loss intruded into her otherwise happy childhood when her mother died in childbirth and Joe was sent to live in a series of local foster families. Although she felt closer to some families than others, she has characterized that period of her life as one of dislocation, lovelessness, and abuse.[3]

Between 1941 and 1942, she returned to the We’koqma’q reserve to live with her father and her siblings, Annabel, Soln, Roddy, and Matt, but only one year later, when her father passed away from pneumonia, she was forced back into foster care with her half-brother’s family in Oxford. There, she gradually became worried by her guardians’ heavy drinking. With the intention of educating herself and learning how to cook, sew, and weave baskets, Joe wrote to the Indian Agent in Shubenacadie and asked to be admitted to the residential school there. Her experience was not quite what she expected. Like most residential schools, the environment was cold and demoralizing, and children were forbidden to speak their Indigenous languages. Despite being ridiculed later for voluntarily enrolling, Joe maintains that she did not regret her decision. Although she resented, for a long time, the fact that the school regimented her daily life and attempted to take away her language, culture, and spirituality, in looking back she chooses to focus on her positive experiences and to be grateful for the last four years of foster care it provided her with.[4]

When Joe was sixteen, she was offered a position at an infirmary in Halifax. Hoping to regain some of the freedom, independence, and spirituality that she had lost to the residential school system, she accepted it immediately. However, because her new job required her to work in an institution run by nuns, it differed little from her former residence. Joe subsequently sought work in a restaurant, first working in the kitchen and later as a waitress, but was fired when she refused to take a customer’s abuse. In the years that followed, Joe struggled to acclimatize herself to life outside the residential school: she recalls that she was naïve and insecure, she began drinking, and, though she tried hard to fit in with her friends and co-workers, she had trouble in relationships. In the years that followed, she became pregnant, travelled to Boston, and floated back and forth between different jobs, all of which seemed more or less the same with their long hours and low pay.

In 1954, she met her husband, Frank Joe, who was from Eskasoni, a Mi’kmaw nation close to where Rita Joe grew up. Both were relatively poor when they got married, and both relied on the help of extended family members, neighbours, and the local community to support their growing family. In 1956, they moved back to Nova Scotia and moved in with Frank’s mother in Eskasoni, and in the mid-1960s, began building their own house.

It was around this time that Rita Joe also began writing—a pastime that became a form of therapy for her because it addressed her situation, past and present, as well as the situation of her children and of her people. Her desire to write also grew out of a general sense of astonishment when her children began learning about Canadian history in their teens and brought home textbooks with incredibly negative and at times blatantly false portrayals of Indigenous people that were passed off as truthful and historically accurate. Once she began publishing her poems, which received a wave of unexpected positive feedback, Rita Joe began writing a weekly column for the Micmac News on subjects ranging from Mi’kmaw medicines and home remedies to traditional stories. After seeing an advertisement for a literary contest in the Cape Breton post in 1974, she decided to submit some of her work. She won an honourable mention, and was offered an editor and a publishing deal.

Upon the publication of her first collection of poetry, Poems of Rita Joe (1978), Joe was asked to speak in universities and to women’s groups as well as other organizations about her poetry, culture, and life. She went back to school, obtained her high school diploma, and took a course in business education. In 1980, she considered going to college but decided to take care of her grandchildren instead so that her husband and daughter could fulfill their own dreams of getting a degree. She published her second collection of poetry, Song of Eskasoni, in 1988, ten years after Poems of Rita Joe came out.[5] It features one of her most famous poems, “I Lost My Talk,” which reflects on language, culture, and assimilation.

During the 1990s, Rita Joe continued publishing in a variety of genres and holding public talks. In spite of her husband’s death in 1989 and her own diagnosis with Parkinson’s disease, Joe continued to be, in her words, an “ambassador for [her] people” (Song of Rita Joe 141). She composed songs, including her well-known “Oka Song” (1991) and “The Drumbeat is the Heart of the Nation” (1992). [6] She published another collection of poetry, Lnu and Indians We’re Called (1991), on the anniversary of Columbus’ so-called “discovery” of America. She became a member of the Queen’s Privy Council for Canada and was honoured with a number of awards, including the Order of Canada (1989), an honorary doctorate from Dalhousie University (1993), and the National Aboriginal Achievement Award (1997). She was also featured in a documentary by Brian Guns, called Song of Eskasoni (1993). In addition, she published an autobiography, Song of Rita Joe: Autobiography of a Mi’kmaq Poet (1996); republished a handful of her early poems alongside new poems she’d written in collections like We are the Dreamers: Recent and Early Poetry (1999); and worked on several anthologies, such as Kelusultiek: Original Women’s Voices of Atlantic Canada (1994) and The Mi’kmaq Anthology (1997). Her poems have also been included in Jeannette Armstrong’s and Lally Grauer’s Native Poetry in Canada: A Contemporary Anthology (2001).

Throughout her life, Rita Joe was not only an “ambassador for [her] people” but a respected elder, a mother of ten, a grandmother of twenty-two, and a friend to many. In 2015, a number of her poems were compiled in The Blind Man’s Eyes: New and Selected Poetry, which was published posthumously; Rita Joe had passed away on March 20, 2007 after a long battle with Parkinson’s. Her family has since set up a fund in her memory to generate scholarships, bursaries, and awards for those striving to be ambassadors, like her.

---. We Are the Dreamers: Recent and Early Poetry. Edited by Ronald Caplan, Breton Books, 1999.

Rita Joe entry by Lara Estlin, April 2018. Updated March 2019. Lara is a former SFU student who completed her English Honours project on Indigenous authors William Apess (Pequot) and George Copway (Anishinaabe). She works as a research assistant for the Department of First Nations Studies at SFU.

[1] The word, Mi’kmaq, which translates as “The Family,” has conventionally been spelled and pronounced incorrectly as “Micmac.” Sometimes, it is also spelled Mi’gmaq, which better reflects its actual pronunciation, but is still considered incorrect. In turn, the word, Mi’kmaw, serves two grammatical roles. It is the singular version of Mi’kmaq and, today, it is also used as an adjective to describe a noun—for example, Mi’kmaw people, Mi’kmaw treaties, Mi’kmaw person—though some people continue to use Mi’kmaq instead of Mi’kmaw for this purpose. For more on the spelling, pronunciation, and etymological origins of the word, see p.2 of “Mi’kmaw Resource Guide” (4th ed.) or “Mikmaw Culture: Overview” (2016).

[2] The spelling of We’koqma’q varies: Rita Joe’s birthplace is also referred to as We’kopa’q, Waikoqomaq, Wakmatkuq, Waycobah and Whycocomagh. In her autobiography, Joe uses the Anglicized, Scottish version, Whycocomagh, as well as We’kopa’q. When pronounced correctly in the Mi’kmaw language, this word means “Head of the Waters.” I have chosen to use the most common non-Anglicized spelling of the word in this article—We’koqma’q.

[4] Rita Joe’s choice to look at her troubled past through a positive lens reflects her own views that, as Indigenous activists, she and her contemporaries ought to “wage a gentle war” that focuses on the positive aspects of Native culture and experience, as opposed to dwelling on the negative (“The Gentle War” 28). For a more detailed discussion of how this personal philosophy is reflected in her work, in her life, and in Mi’kmaw history and culture more generally, see McKegney. For more on Rita Joe’s own reflections regarding her experiences at the Shubenacadie Residential School (1944-948), see pp. 44-58 in her autobiography.

[5] In her autobiography, Joe reflects on the differences between her 1978 and 1988 poetry collections. She has labelled the first as a “cry and look at me” collection, one that reflects on her experiences after the death of her parents and attempts to work through a lot of the trauma she experienced (117). The second, she explains, was more assertive, at times angry, but never overly aggressive or hateful. “I was at war,” Rita Joe explains, “but it was a gentle war,” a war that attempted to “recarve” the age-old colonial images, stories, and histories of Indigenous people that had been knocked around by the misinformed non-Indigenous community for too long (128-129).

[6] For more information on Rita Joe’s work as a songwriter, see Smith and Alstrup.